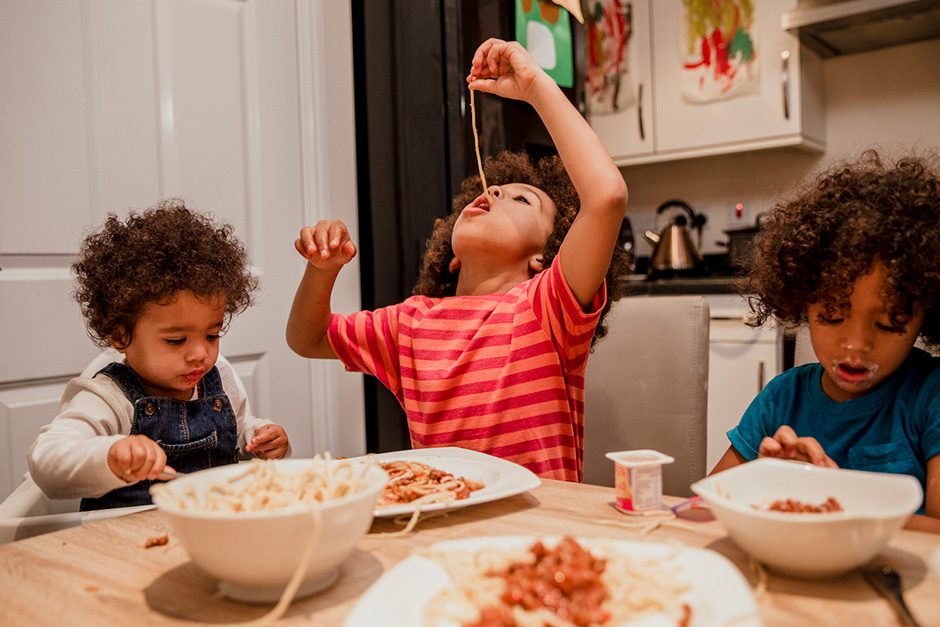 Just because they’re still in the weaning phase, that doesn’t mean they can’t eat at the table. In fact, it’s good for them to get into the habit of eating with you; think of it as your starting point for teaching table manners. In reality, life gets in the way sometimes and eating together every night just isn’t possible all the time but a couple of times a week? Yep, that still counts.

Focus on the food

Mealtimes need to be distraction-free. Remember you’re laying the foundations for a healthy attitude to eating. No TV, toys or phones. Your positive and interested attitude towards dinner when you sit down to eat is exactly what your kid needs to see.

They’re hardly ready to play the role of sous-chef but having them watch you as you peel and slice ingredients, and talking about each vegetable, is enough to spark their curiosity.

Feed them what you’re having

Well, a simpler version. If you’re having a roast dinner, set aside some of the vegetables to puree up and feed to your baby. If they can see you eating something similar, they usually want to try it too. Monkey see, monkey do, right?

A bit for you and a bit for baby

The aim is to keep them occupied throughout the meal, so employ the ‘a bite for you, and a bite for baby’ rule. It’s good to combine spoon-feeding and bits of finger food to give them options and variety in what they’re eating.

Sometimes they’re not hungry or they’re just full — that’s okay. It’s really good that they’re learning to listen to their hunger cues. It’s also a good gauge for future about how much they can actually eat, all babies seem to differ on this one, especially as they’re growing.

They’ve just thrown a tantrum along with whatever food they were holding, we get it. But your little monster was not born with table manners, so give them a break while they’re still getting used to the whole eating thing. Behaving at the table comes later.

If they try something healthy and enjoy it, congratulate them. Even if they don’t eat very much of it and reject another spoonful, this still counts as progress. Eating independently, whether it’s feeding themselves finger food or digging a spoon into their bowl — that deserves a gold star too

Back to Parent hub
This website or its third-party tools use cookies (not those kind of cookies). They’re needed to keep it working and smooth sailing, but if you don’t want to consent to all or some of the cookies, take a look at the cookie policy. If you close this banner, scroll through the page, click a link or continue to browse, you agree to the use of cookies.