20 mothers who changed the world 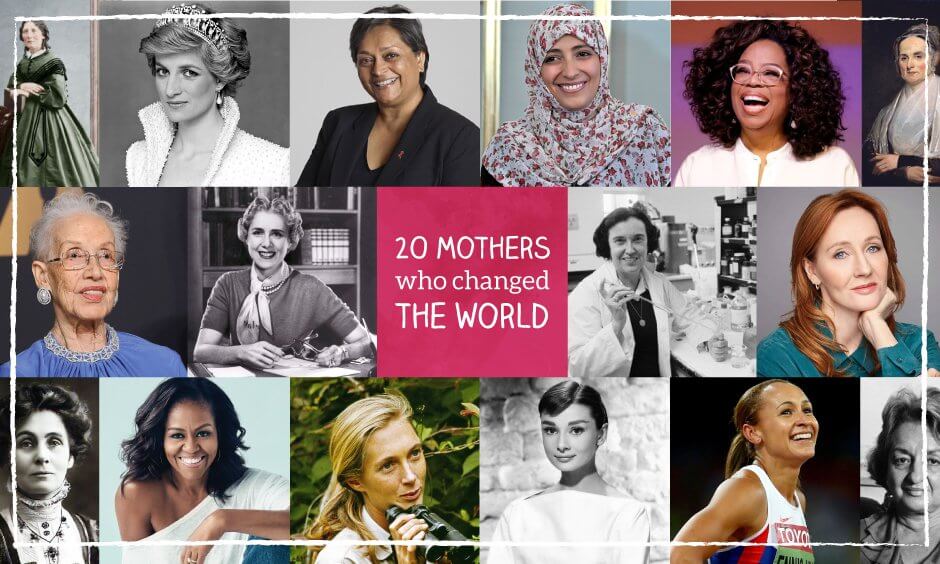 Needless to say, being a mother in itself is no easy feat. Honestly, some days just making it through to 2pm without any major meltdowns is enough (i.e. all we need to deserve that glass of red).

At Piccolo, we’re all about supporting women – so for Mother’s Day 2020, we’ve rounded up 20 women who we’re particularly in awe of.

Not only have they navigated the minefield that is raising children, but they’ve also accomplished amazing achievements which have had a serious impact on the world we live in today!

This Mothering Sunday, as well as celebrating ourselves, join us as we recognise these women who’ve changed the world.

No list would be complete without Princess Diana. Known as the People’s Princess for good reason, she devoted herself to helping others and used her platform for good.

Having worked with dozens of charities and been deeply involved in the International Campaign to Ban Landmines, Diana was a pioneer for women with profiles making a change in the world.

Yemeni journalist, human rights activist and leader of the ‘Women Journalists Without Chains’ group, Tawakkol Karman is known as ‘Mother of the Revolution’ due to her courage in sticking up for human rights injustices in Yemen.

She was also the first Yemeni and the first Arab woman to be awarded the Nobel Prize and the youngest Nobel Peace laureate to date.

In 1900, at the Summer Olympic Games in Paris, English Charlotte Cooper became the first ever female Olympic tennis champion, winning the first-place prize.

Before this, she had won five Wimbledon titles. Cooper was the second – and one of only four women – to win the ladies’ singles titles at Wimbledon after becoming mothers.

Through her books, British author, JK Rowling, brought the world one of the most loved and most famous literary characters ever: Harry Potter. In 2010, Rowling was named the ‘Most Influential Woman in Britain’ by leading magazine editors.

While she was the first female novelist to become a billionaire, she lost her billionaire status after giving away much of her earnings to charity. She has supported multiple charities through her charitable trust, Volant, as well as launching Lumos, her own children’s charity.

Well known for her work protecting the earth’s oceans, American marine biologist and oceanographer, Sylvia Earle, was Time Magazine’s first Hero of the Planet in 1998.

Sylvia founded Mission Blue, a non-profit dedicated to creating protected marine preserves around the world. She is also committed to increasing awareness of the ocean’s importance and has created a LEGO series of deep-sea exploration kits, which will inspire the next generation of ocean protectors.

Kenyan Wangari Maathai founded the Green Belt Movement to tackle environmental damage and the need for women’s rights in the country, by planting new trees in deforested areas and sustainably draw income from the land.

The Movement has trained 30,000 Kenyan women in trades to raise them out of poverty and planted over 51 million trees. For her dedication to both causes, Maathai became the first African woman ever to receive the Nobel Peace Prize in 2004.

American feminist, Betty Friedan, wrote ‘The Feminine Mystique’ in 1963, the book which is often cited as having sparked the 2nd wave of feminism.

The book, which disagreed with the view at the time that women should only be housewives and mothers, initially only printed 2,000 copies, but sales exploded and it was bought by 1.4 million people.

British actress. Audrey Hepburn was an influential figure in the 1950s and 60s, appearing in a number of iconic films, like ‘Breakfast at Tiffany’s’.

After her acting career ended, Audrey devoted the rest her life to humanitarian work with UNICEF, for which she received the Presidential Medal of Freedom in 1992.

As a result of The Oprah Winfrey show which ran for 25 years, Oprah is now one of the world’s most famous, most influential and most loved interviewers.

She has also done a huge amount of charity work, including setting up two of her own foundations and donating millions of dollars.

A freed slave who won freedom for herself and her 3 daughters, Bridget Biddy Mason was a nurse, midwife and philanthropist.

She was one of the first black Americans to own property in Los Angeles, and she helped to start an elementary school for black children, gave money to the poor, visited prisons, and tried to help her community in any way she could.

The second American woman to be awarded the Nobel Peace Prize in medicine, Rosalyn Sussman Yalow helped develop the radioimmunoassay (RIA) technique that helps screen blood for communicable diseases and detect the presence of insulin.

Rosalyn and her research partner decided to not patent RIA so it would be available to help the widest amount of people possible.

Well known for her crucial role in the UK suffragette movement, Emmeline Pankhurst was named as one of the ‘100 Most Important People of the 20th Century’ by Time Magazine in 1999.

Frustrated with the lack of action from peaceful protests for women’s enfranchisement, Emmeline’s militant tactics changed the suffragette approach and helped women win the right to vote.

Lucretia Mott was an abolitionist in America, known for harboring fugitive slaves, her generosity to charity and her support of women’s suffrage.

She continued her Involvement in anti-racism and anti-slavery rallies and activities, despite criticism that it was unseemly and divisive as a woman.

Lucretia will be a new face of the $10 bill this August in commemoration of her work promoting voting rights for women and black Americans.

At a time when female scientists were often considered too fragile and emotional for fieldwork, British Jane Goodall proved everyone wrong.

Her discovery of tool use among chimps led her to argue that we’re not as different from the rest of the animal kingdom as we used to think.

As well as being the world’s expert on chimpanzees, she’s also a dedicated advocate and activist on behalf of animal welfare and conservation causes.

For Jessica Ennis-Hill, it was the London 2012 Olympics that really secured her spot in the history books. Having won the gold, then gone on to win the silver in the Rio Olympics in 2016, Jessica inspired millions of people and was deservedly made a Dame in 2017.

African-American mathematician, Katherine Johnson, worked for NASA for 3 decades and was integral in calculating the trajectory of the 1969 Apollo 11 mission to the moon. In 2015, President Barack Obama said of the former NASA employee: ‘Katherine G. Johnson refused to be limited by society’s expectations of her gender and race while expanding the boundaries of humanity’s reach’.

American playwright, social activist and politician, Clare Boothe Luce, is most well known for her 1963 play, The Women, with an all-female cast.

A woman of humble beginnings, because of her determination to not let her gender stand in the way of her personal and professional achievements, Luce is an influential role model for many women and in 2017, she was inducted into the National Women’s Hall of Fame.

Quarraisha Abdool Karim has spent over 25 years researching how HIV/Aids is spread in South Africa and the impact it has on women.

In 2013, she was awarded South Africa’s highest honour, the Order of Mapungubwe, for her breakthrough contributions, and has advocated the education and training of women in science.

American abolitionist and author of Uncle Tom’s Cabin, Harriet Beecher Stowe’s works were integral in the anti-slavery movement. Legend has it that Abraham Lincoln greeted Harriet at the White House by saying: ‘So you’re the little woman who wrote the book that started this great war’, in reference to the civil war.

Also hailed by Time Magazine as one of the 100 Most Influential People, First Lady Michelle Obama has consistently supported women and used her platform to champion causes like ending childhood obesity, helping women in work and military families.

As mothers, the things we do for our little ones are invaluable, but this Mother’s Day, let’s also remember the impact we can have as women, and remember that mothers change the world.